The album was released in 2006, and was met with huge anticipation from the growing numbers of fans heading towards grindcore as such, especially in the US. Being produced by one man (Shaun LaCanne, ex-Numskull) it was quite a success, not to mention it had a big backing label “Goregiastic Records”.

Of the artist and the album as such, Putrid Pile depicts a masochistic and violent theme in most of their albums. The Pleasure in Suffering being no different, one can easily make out the theme of the album by name of it itself. Lyrics were all about mindless gore and psychopathic anger based rampages with necrophilia for some reason, being one of the main motives of the crimes described in the tracks. It does strike as quite a passion for the lyricist (Shaun himself if I’m not mistaken). 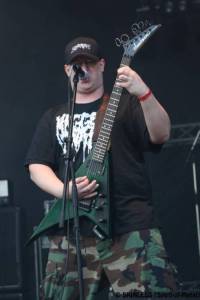 Coming to their music, it is awesome. I had posted the video of their track- Food for the Maggots (Squeal like a Pig!) which is my favourite track in the album. To an experienced ear, one would realize exactly how different this album is when compared to most brutal death/ grindcore albums. The music isn’t just the noise and the beat that you get from a band typical to this genre, it is much more creative and theme oriented. A murder or the perverted rapes would have the apt instrumentation in the background. One more feature that I liked about this album was that it is short. In about 30 minutes the entire brute ostentation is over, because frankly there is only this much of sodomy and strangulation a guy can take at a time.

The cons to this album, like other brutal death albums would be, one- lyrics are senseless. Fine if the theme is necrophilia, do it, just write it out in a manner that actually makes sense or is in some manner smart (although the validity to this point can be questioned since the vocals are gutturals and bree, stuff from which people cannot derive any meaning from anyway). Also, this particular album did get monotonous in the middle for a couple of tracks. Be all out merciless if you have to be in this particular genre!

Either way this does remain in one of the better halves of this vast genre. Do give it a listen, definitely worth that half an hour!

Ok. So apparently bree is in the “in” thing nowadays.  Every forum you go has at least a handful of wannabe vocalist wanting to know whether it is for everybody to make that ghastly racket or not. And quite frankly i don’t know what the whole fuss is about. I had recently gone into this craze of having a brutal death fiesta. I couldn’t have found a way more worse that that to waste my time.

After about a dozen youtube videos all consisting of bands with awesomely horrid album art and very similar looking names (mind you, similar looking, all thorny and symmetrical) i narrowed down to Defeated Sanity which according to me was the most bearable. While their album was getting downloaded, i heard another playlist consist of Putrid Pile, Dying Fetus, Guttural Secrete and Cemetery Rapist. What have these people got against people as such? Why would i want to listen to a guy screeching about his infected intestine or about some mass rape/murder of women. Yes, i get the fact that deranged thoughts occur a man once in while, I myself have had my share of masochistic or twisted dreams involving huge hammers and squashed heads smashed onto the wall while a truckload of bile wait for their chance to get under my axe. Yes, i’ve very happily  written about it all, but i don’t go on advertising about it generally. Whereas these bands, they’ve made it their job to tell their fans how exactly “putrid” they can be. The fact that they advertize it so much, seems to me as though they’re just showing off their skill at pig squealing.

Let’s analyse their music. I’d be fair by saying to each his own taste. I’m not contradicting the point i stated about nonsensical lyrics, because frankly, not one guy would get a word being growled or squealed. Not even the guy doing the growling or screeching. To me the snare sounded a bit off (typical for all of the bands I heard, hence maybe that’s the way it is done) otherwise the music would be something I’d listen to while watching a bloody gruesome fight or a similar scenario. Gets your blood boiling.  But once the squealing starts its like, “what the fuck went wrong with the recording studio?” Its sounds like utter crap, it is most probably anyway, I didn’t bother checking with the lyrics there.

Anyway by this time “Chapters of Repugnance” the album I’d put on download was done. I liked what I heard, but the same flaws were present here too. Plus the name of the songs really put me into perspective, showing me exactly how sad my vocabulary is. Introitus, Consumed By Repugnance, Carnal Deliverance, Salacious Affinity, Engulfed In Excrutiation, Coerced Into Idolatry, Blissfully Exsanguinated, Calculated Barbarity, Lurid Assimilation… This is the playlist. I needed a dictionary. And some of the words don’t even exist. Anyway that’s beside the point, the vocals made the entire atmosphere dead gloomy, but with this primitive tribal rhythm ringing in my head. The following painted quite a picture in my head.

or even this one,

Strapped onto the table

Mutilated with the hacksaw

But I must say, had the squealing not been there, if grindcore, deathcore or brutal death or whatever other synonym you can come up with, were squeal free then I’d say these bands would be quite epic too. Not because of their ideology, but their music. I discovered a new narcotic today, and i will continue searching for that band that has this music minus the squealing.

Ps. This video. Something that I stumbled upon. Ignoring the squeals, i’d say it is pretty good music! Putrid pile \m/ 😀