Infernal Wrath is Mumbai based band. This fact alone makes me regret the fact that I’m not from that city. This band blew me away with its amazingly ethnic and naturally extreme soundscape.

“Inside of Me” is a treat to listen to, in one go. So many textures and so many variations in the span of about an hour, this album is what I’ve been looking forward to for a long time. When I say that, I mean the sound, the nature of this album. Being publically advertised as influenced by Indian Classical and World music, this band has done justice to bringing that sound immaculately into this production.

This album has all the elements of this grind meets black genre, but then it is sprinkled with stilted yet unexpected classical signatures with instruments ranging from the sitar to the cello (or at least that’s what it sounds like in The Swordbearer). This Forever Lasting Journey surprised me with a piano solo of the kinds of current trends of New Age artists. I definitely did not anticipate this, knowing full well that this is was self-proclaimed experimental undertaking.   Not highly intricate or of multiple layers but quite the atmosphere creator.

I’d say this album deserves the shelf of those who like a trip and do not just stick to Dubstep or Floyd while enjoying that buzz. I would’ve love to proclaim it as inspired by Indian culture, but I guess we’re not there yet. But this album and this band definitely has made quite a leap down that particular road. Up-coming bands should take a leaf out of Wrath’s book and see how well classical could gel with Scandinavian extremes.

Having said enough about the production and its diversity and concentrating more on the efforts by the band members, I’ll say it’s a decent job done. Work done on the keys was layered and the sampler used efficiently and quite successfully maintained the ethereal feel in the album. The riffage is memorable with my favourite being Inside of Me and Behold Ezekiel. Drums were actually overshadowed with the shear variety portrayed here.

Vocals I did not like, at least not while it was being delivered in the guttural manner typical of earlier death metal artists. It was too heavy for the patches used and quite the ambience-killer. But here too was an exception, were it was spot on in the track At the Foothills of Palestine.

I found this album quite a welcome change and for a debut album of this sorts, this band is what you need to keep a track of.

Devoid’s debut, and how? A God’s Lie is just what the Indian metal scenario needed; solid, heavy and hardcore thrash metal.  The name itself is enticing. Makes you expect something good. And good would be an understatement. I’d like to say influenced by Slayer, although that’s not quite putting the finger to it. Devoid has found their own frequency and this album is proof to exactly how good they are! Hiccups in the lineup have not hindered in their path of making a quality debut album.

The beginning is highly inconspicuous. A very uneventful intro, A Silent Death, very silent indeed. Doesn’t at all give a clue about the bombastic tracks this album is loaded with.

Battle cry had earlier been released and it blew my mind away. But I didn’t expect that sound to shape into an album. What hit me first were the vocals. Endearing, should I stretch it. Very rarely does a band get the vocals right, according to me. A particular style suits each sound, and Devoid got it right. “Beer Song” was another single that I’d heard before. Sweet! A thrash track dedicated for the love of beer! My type. Next what hit me were the guitar patch and tone. Powerful and rarely overdone, just the kind I like. Riffs are highly creative, my favorites here would be “Devoid of Emotions” and “New World Order”. The title track “ A God’s Lie” has quite a complex structure and has been experimented with a lot, and been made awesome. Just made me want to see them live, gig-perfect \m/

Some solid drumming skills have showcased in this album. Apt, not too subtle or heavy. But it would’ve worked out even more if blast beats had been used extensively, I can’t help it, I’m just too biased when it comes to this! Lyrics expose a lot of ire, nothing new about that though. Quite typical of this genre, not that anything else would go with it either, no one’s expecting a lullaby.

This is a promising band definitely. I’d be a fool to give this album anything less than an 8/10

Finally got my hands on Dinner is You. Quite a delay in receiving it, but then again given Diwali and Patiala, I couldn’t hope for more!

Ok. Let’s start with the theme. Cannibal king and his escapades! The first two tracks are all about death to visitors to the Master. The latter half narrates how the Master undergoes a trial where he feeds on the judge and subsequently on (supposedly) a man of the law. Lyrics are amazing! What a scene to depict in an album!

Vocals. I like the imitation “Welcome to Kuru…… Dinner is You!!”. It reminded me of the clown in  Dethklok. Personally, not my favourite of styles of narrating but I guess it is best suited of the  atmosphere this EP creates, one of horror and death (although I should add comic too, lyrics really  got me laughing!)

Music as such is slow paced in the beginning, reminds you of a predator about to pounce on its prey.  The album builds up pace after the master starts his assault. Smooth and suave he kills and eats, and  soon the Master’s ghastly acts are presented in the court of Kuru. Here the sound again gains quite a  mellow yet infernal feel to it. It builds up to the climax where the Master (*spoiler alert*) turns out to be the king of the cannibals :D. Awesome shit!!

Literally breaking down to each instrument, the guitar patch set the pace and the mood. Percussions were neat, but that’s it.

This EP was something I was not expecting, conceptual, temperamental and best of all gory. Not like grindcore themes but yeah comic-gory.

New Delhi based band Artillerie has announced the release of their debut album “Eradefiled” with a 9 song tracklist being:

It would be released on the 7th of November, hard copies and free downloads available! (I love the latter option :D)

I liked their previous EP “New Offensive”, but not liked it to death-sorts.  Hopefully this would blow my mind away! And also that they give us a little preview on this album at their upcoming gig on Sunday.

Dilli-walon turn up at the Double Decker at South-Ex. Link to the gig info –  Facebook Event

Amogh Symphony is out with the promo to their latest venture “The Quantum Hack Code”. Going to be fucking EPIC! As usual :D.

Video is weird. Too matrix-y. A chic with a hot voice goes on a barrage about human being trapped and stored, contained. Matrix-y, like I said.  Then again the outro does give a feel of incoming onslaught. Looking forward to this!

Silver Tears, hailing from Guwahati are the latest meat on the block (along with Guillotine, I’ll come to them later). This band has been creating a lot of buzz in the Indian metal community, especially with supremely distinctive sound when compared to most of the upcoming bands here in India. Granted they are now on a totally different genre, but a change is never annihilative :D.

Their music is definitely different. Give it a listen here: Silver Tears – Reverbnation

I found it spunky frankly. Vocals kinda high (that could be a fault with the recording equipment too) but otherwise no glitches. Not the usual death/doom/thrash/atmospheric/black stuff that I entertain myself with daily. For me it’s a pleasant change, not a permanent one though ;).

Anyway their EP is due soon “Dirt Beyond Beauty”, 30th of this month in fact and the best part is that it’s free! free! FREE!! :D. So in case you did like the sound of Silver Tears do download their EP.

And the EP is out. Bhayanak Maut has released their 3 song EP Metastasis, today at 000hrs.

Sounds awesome! The tracklist is: 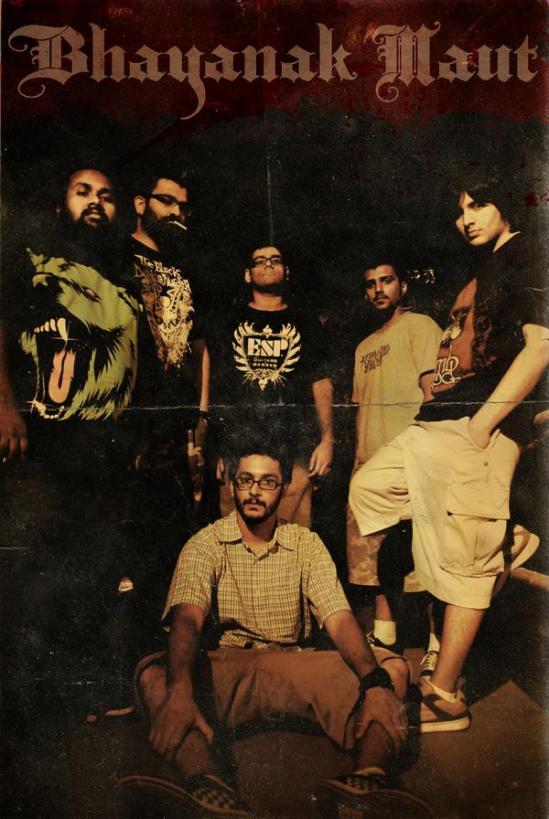 The first song starts strong, continues it shit till about the end, then it dulls out. Vocals are impressive, in all three tracks. ( I won’t comment on the lyrics because I don’t know them)

Loving the riffs, The music is custom made for a night with \|/, booze and headbanging. Get’s you started especially with loud ass speakers. Percussions awesome!! I like the influence of grindcore techniques in drums (during the verse of Dear Name), and whether it was intentional or not, neat job!

I wish they had more tracks, at least one more, and thus completing the quota of 20 minutes! 😀

Anyway a good material from Bhayanak Maut. I would look forward to more stuff from them.

Error: Twitter did not respond. Please wait a few minutes and refresh this page.