I was in the mood for some slow/sludge/doom like genre today. And October Tide is the best remedy for this sudden obsession. It was sad that the band did not continue for long (I have heard it is reformed with a new line up, but I haven’t really checked, so) otherwise this band has the potential to put me in a beautiful state of monotone, I love it. 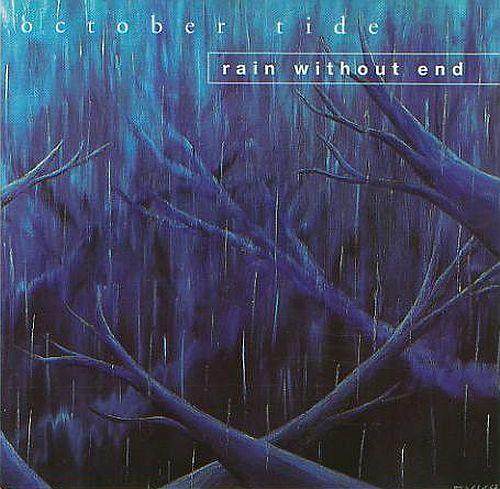 So here is reviewed their first album Rain Without End. The brainchild of Jonas Renkse, the famous persona from Katatonia and member of the Bloodbath super group, this band showcases exactly how diverse one man could be. The soundscape of this album is a million shades depressing than Katatonia and more than just a tad less extreme than Bloodbath. A very audible bass line with acoustic tones supplement to the effort of the creation of this state of nothingness. A nice lightheaded buzz is retained, probably an echo of the patch used in a majority of the tracks.

The vocals have a quality of being dead depressing and hollow, like the voice out of the depths of an ancient oak. Not overly exerted, not too stretched, just the right amount of it to keep you interested and buzzed. A slight monotony makes this album, something I thought was not possible.

The guitars and the bass envelop the drum’s fickle rhythm pattern, creating the ultimate soundscape. Unpredictable, clear and an audible bass line did it for me. As I write Sightless’s mind blowing intro struck me, so different from its precedent. And now it has come back to its frequency, a shift in soundscapes so smooth and yet so strikingly different amazes and impresses me.

I had always considered Die Verbannten Kinder Evas as the kinds that I would consider Doom but this album has opened a whole new wave of music that I could listen to when I require nothing more than a doobie and solitude.

One can see that Katatonia could be heading this way, specially due to some familiar sounds in tracks likeLosing Tomorrow and others. This albums is a like watching a certain scat viral video, it takes time to build up, all nice and mellow, but when it does hit, it leaves a lasting impression.

This album is a beautiful production and I’m looking forward to reviewing their more recent works. Let’s hope they indeed have reformed, because I won’t give Rain Without End a score less than 8/10.